Coping with Drought and Climate Change

This five year project seeks to develop and pilot a range of long-term adaptation measures in the agriculture sector to reduce the vulnerability of small-holder farmers and pastoralists in rural Zimbabwe to current and future climate change related shocks. The goal of this project is to enhance the capacity of agricultural and pastoral systems in Zimbabwe to adapt to climate variability and change.

The primary focus of the project is Chiredzi District in Masvingo province. The project has been designed around three main components to address barriers hampering long-term adaptation to climate change in the agriculture sector in Zimbabwe with special reference to agro-pastoralists in the semi-arid regions of the country.

(i). Developing capacity of national institutions to improve knowledge base to facilitate climate change adaptation,

The Government of Zimbabwe (GoZ), through the Ministry of Environment and Natural Resources Management, and the UNDP oversee the implementation of the project. The project will add impetus to Zimbabwe’s efforts to attain the UN Millennium Development Goals, particularly the goals on eradication of extreme poverty and hunger, promotion of gender equality and empowering women, reducing child mortality, ensuring environmental sustainability and developing a global partnership for development.

Chiredzi District is located in a semi arid part of Zimbabwe, extending over an aggregate area of 1.71 million hectares, in the south eastern extremity of the country. The District experiences low rainfall and within-season rainfall variability is high. Thus, rainfall pattern limits production of dryland crops.

When considering the economic situation and livelihoods of the inhabitants of communal areas as well as the state of infrastructure in these communal areas, this district is regarded as one of the poorest districts in the country. It however, encompasses a wide diversity of land uses; that is, Parks and Wildlife Estate such as the Gonarezhou National Park, the Great Limpopo Transfrontier Park and private ranches like the Save Valley Conservancy, large-scale commercial irrigation estates such as Hippo Valley, Triangle and Mukwasine, communal lands, and small-scale commercial farm land and resettlement areas.

Over the years, crop production reports data from the Department of Agricultural, Technical and Extension Services showed that large areas are cultivated for crop production but very low yields are achieved in all communal areas. Further, the amount of crops produced is inadequate to meet food requirements (Socioeconomic Report, 2008). Chiredzi District is, however, well endowed with fertile soils formed on gneisses and basalts. It is not possible to take full advantage of these soils for dry-land farming because of the low rainfall. However, these soils are highly suited to irrigation and form the basis of the successful irrigated sugarcane estates of Triangle, Hippo Valley and Mkwasine. 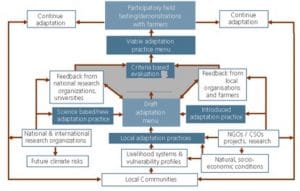 The conceptual framework above summarises how the project has involved communities. The project is using a mix of approaches in framing adaptation practices to pilot depending on the context. However, the vulnerability reduction approach dominates. The involved community participated in risk and vulnerability assessments and pre-selection of adaptive strategies. A few selected vulnerable households are participating in the implementation of pilot demonstration projects with support from the project and project partners in the district.

Main benefits to the project beneficiaries include:

The factors that explained the success of the Project related to its adequate and appropriate contextualisation, conceptualisation and implementation. Contextualisation was in terms of a) the bio-physical environment which sets the lower and upper performance limits for agricultural and wildlife production, b) the socio-cultural context which, in conjunction with technical adequacy of interventions, determines whether people adopt the proposed interventions, c) the economic environment that influences the commercial and financial viability of the interventions, and d) political situation that determines to what degree the projects could be implemented practically. In more specific terms successful contextualisation of the project was achieved through:

Appropriate conceptualisation of the interventions, was based on the principle of ensuring participation of all concerned parties as illustrated by:

The appropriate contextualisation and conceptualisation efforts were buttressed by a good |implementation regime that sought to ensure: